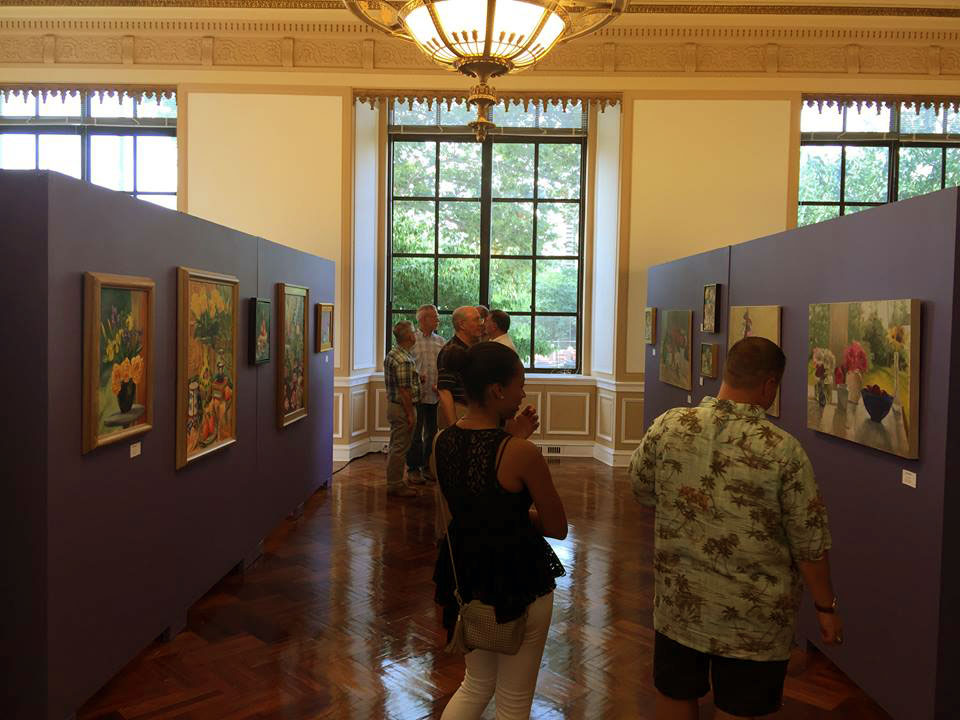 Joyce Millman concentrates on the subtly of home life with bowls of fruit and vases of flowers. Paintings like “At the Window” and “City View” show a shifting viewpoint, from the serenity of an arborous backyard to the looming Philadelphia skyline. Her use of shadows and light colors represents the moment in each day where the sun peaks over the eastern horizon, signaling the start of a new day.

Anthony Casasanto, who has a lifetime’s worth of experience as a culinary artist, incorporates food in his pieces but also dabbles in some landscape scenes as well. Casasanto’s paintings are lucid, his colors deep, and each color has a significant role to play. “Always Forward” contains three different shades of red, interwoven with several shades of green to create a poignant depiction of the rural way of life.

Ruth Miller’s subjects are people from all walks of life, from the humble but resilient Tibetan monks to casual Philadelphian street performers. Miller’s greatest strength lies in her ability to express the emotions of her subjects whether it’s a single person or a multitude of people in a piece. Some of her other works, such as “Birds of a Feather” and “Geisha Girls” represent a small portion of her Still Life collection. Dark colors and dimmed lighting gives these paintings a photorealistic quality.

Christopher Brown, the sole photographer, experiments with different subjects and techniques that working with a camera offers. On display are some photos from his Owls, People, Wildlife, and Aqua Cadens collection. Some of his most intimate photographs are from his People collection. “Danny” a close-up portrait of a homeless man, shows the pain and strife in a deeply human face that is often ignored by the general population.

Eimi: Revelation in Time runs from July 16 till August 9.