From December 6th to January 12th Legend Galleries had the privilege of showing Susan Leshnoff’s series Genesis Revealed. Susan’s artwork explores her personal interpretation of the first part of the bible, Genesis. Genesis Revealed is broken up into two bodies of work. The first body, Genesis, focused on the creation of Earth, and how it might have looked while the world was being made. In works like In The Beginning, Susan shows the struggle between light and dark, as they fight one another in an effort to create what eventually becomes the World. Frantic, chaotic, lines dance across the canvas as dashes of color are intertwined in the struggle. Her second body of work, SkyVisions, deals with the aftermath of the creation, and represents serenity on Earth. All of her painting in the series SkyVisons use bright saturated colors that are almost fantastical. With so much color, and so many lines moving horizontally across the canvas, it’s hard to tell where Heaven ends and Earth begins. When looking at paintings like Yellow Purple or Purple Striped Sky, it is easy to get a sense of calmness and serenity. Susan Leshnoff will be showing more of her work at Legend Galleries coming up in March, if you didn’t get a chance to see her December or January, come by in March to observe her paintings. 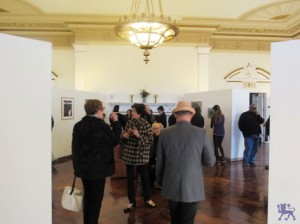 An exhibition bursting with color, InnerVisions is a fitting introduction to Spring. Jean Blumberg's first showing at Legend Galleries invites viewers to tap...